This writeup is out of date and contains no info from after the countdown ended on Thursday 2020-11-05 18:00 UTC. I will be adding a writeup of these steps in the time to come.

What we know so far.

The Collector’s Edition (CE) of Beyond Light contains the following items: a bag, a canteen, a soundtrack (digital), a sticker, a postcard, a letter/report, a “mysterious logbook” and a statue of a pyramid ship.

Out of these, we have found things of interest on the postcard, the letter/report, the pyramid and the logbook.

In case you are only here for the emblem codes, here they are:

Go redeem them at bungie.net/redeem. If you want to know how they were found, read on!

Officially called “The Splinter” in the guide explaining how it works, the statue has four modes: On, Breathe, Code, Off. In Code mode, it blinks in a repeating pattern of about a minute, with a combination of short, long and pulsating blinks. This code has been cracked, see The Code From the Pyramid. 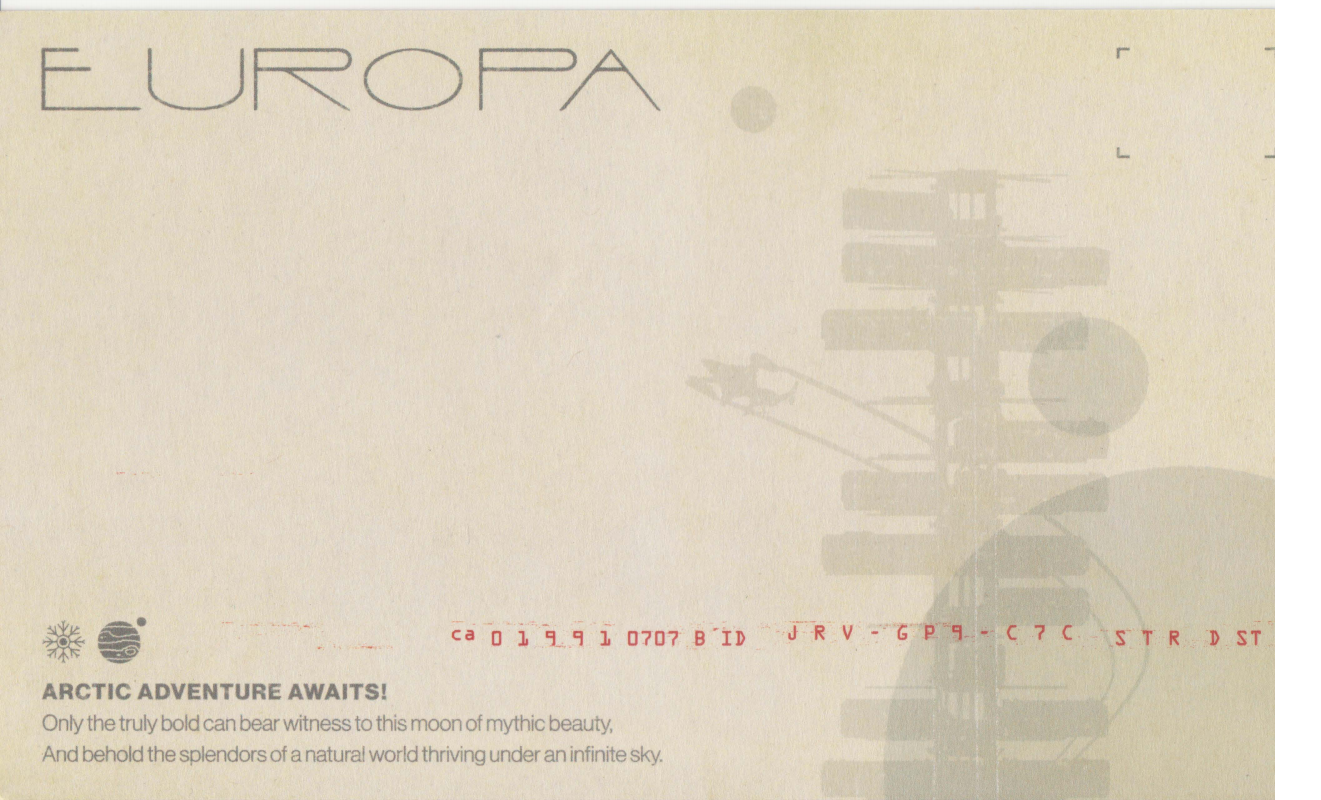 The postcard contains a line of red text containing the following three parts: ca 0 1 9 9 1 0707 B´ID, N N N - N N N - N N N, S T R D ST The first and third part are equal on all postcards. The second part is unique for each postcard, and is an emblem code that can be redeemed for an emblem at bungie.net/redeem. THE CODE IS UNIQUE AND USABLE ONCE ONLY! DO NOT SHARE YOURS WITH OTHERS BEFORE YOU HAVE REDEEMED IT!

The third part seems to be a reference to “Stardust”, which has been rumoured to be an internal codename, first for Season of Arrivals, then for Beyond Light. Its appearance here seems to support the latter. May also be an allusion to the seeming fact that The Nine have an interest in Europa (as detailed in The Letter/Vanguard Report).

The letter is twofold: a report to the Vanguard by “CHA-319” regarding the ban on traveling to Europa, and a handwritten letter on the back. The letter references Clovis Bray as “my grandfather”, and is signed “Your stranger I remain, E”. This confirms that the Exo Stranger is Elsie Bray, as we have suspected for a while now.

The logbook is 46 pages long and details Clovis Bray’s exploration of Europa and work on Exos. It contains a ton of puzzles and lore, as well as some letters to and from his grandchildren: Elsie, Ana and Willa. Hot damn is this a read. I recommend looking through it all. So far all the puzzles we have found came from within this logbook, and there are probably more because there are so many cryptic images in here.

All text from the logbook also exists here (Google Docs), courtesy of Eruke (Eruke#7280 on Discord). It is all copypastable, and well formatted!

There are several puzzles. Most are found in the logbook, so far. We have solved some.

The Code from the Pyramid

The solution to this mystery can be found by combining the blinking of the pyramid on Code mode with the table on Page 1. 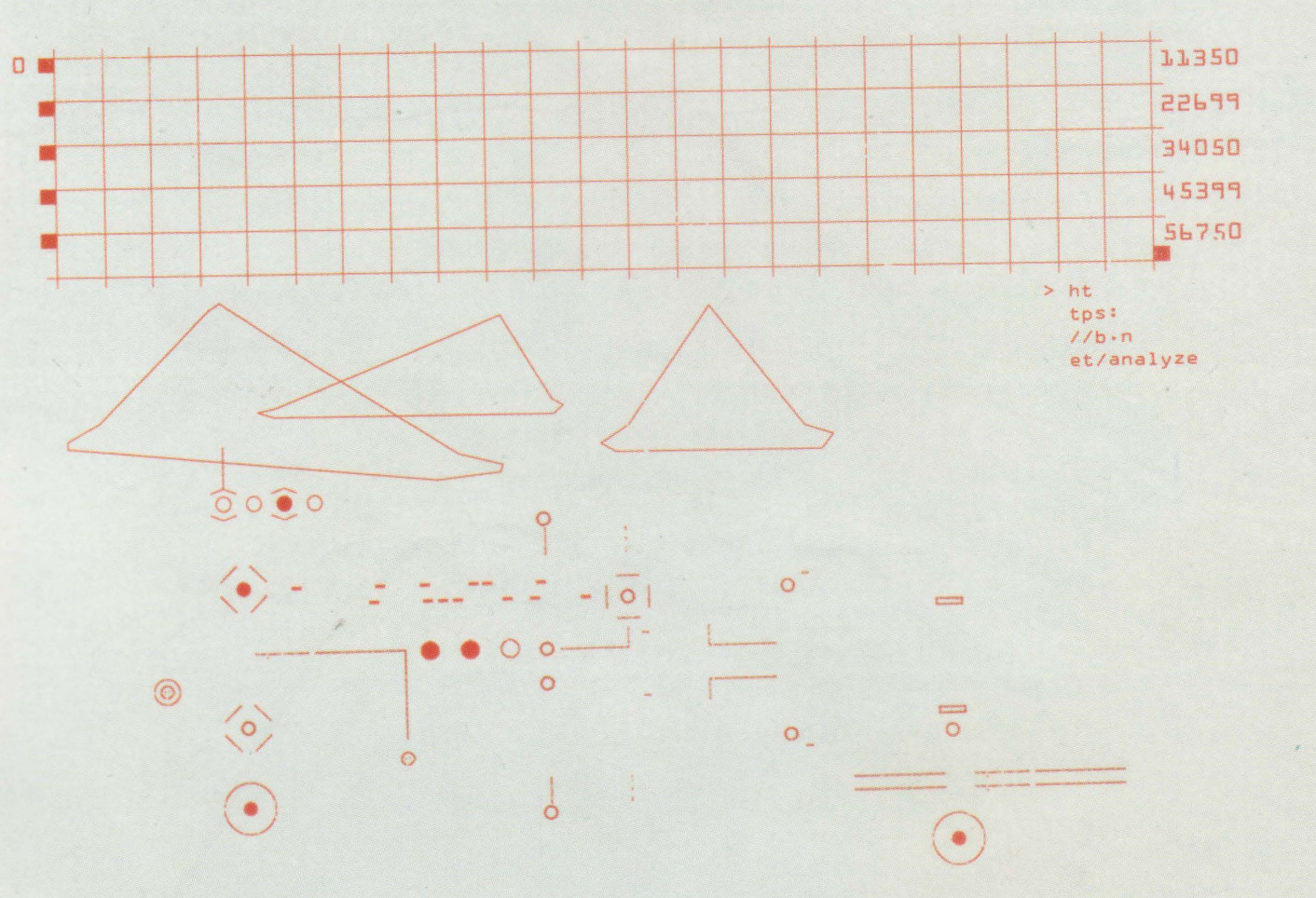 To the left of the first row of the table is the number 0. To the right of the table, one on each row, we find the following numbers:

Additionally, underneath the table, we see three outline drawings of The Splinter. Pointing to one of these, conspicuously in the same place as the on-button of the statue, is a sequence of four dots. The third of these dots is filled. Remember that the third mode of the Splinter is the Code mode, which means that the Splinter is likely a part of the solution to this puzzle!

Here is a 63 second video of the Splinter blinking, courtesy of Melmsie (Twitter). Note the softer “pulsing” blinks that appear about every 11 seconds.

Bachmanetti figured out that the numbers to the left of the table are timestamps (in milliseconds), and that they correspond with the pulsing type of blinking. Dividing the milliseconds by the amount of columns (for instance, 11350 ms / 23 columns ≈ 500 ms/col ), we find that each cell in the table roughly corresponds to half a second. If we jump half a second at a time on the video and fill the cells that correspond to a lit shard, we get the following result:

This spells out CHOOSE. (Dzho actually noticed the split into five sequences and made this image before Bachmanetti realized the numbers are timestamps)

There is a hint about where we can use this code, too. Underneath the table is the following text:

This is easily understood as https://bungie.net/analyze, which indeed is a webpage that contains a code entry field.

To fill in the code, one must be logged in to Bungie.net and have redeemed one of the CE postcard codes (in essence, you must be an owner of the CE). If you do this (and wait a bit for the sync to update your permissions in the background somewhere), then entering “CHOOSE” into the field will give you a screen like the following:

This is a countdown, specifically counting down to Thursday Nov 5 at 11 AM PDT (18:00 UTC, one hour after reset). This seems to be a countdown. If you are a CE owner, check back on the page after the countdown ends! Chances are this will be the start of the ARG proper, and that we will get instructions for the next step on this page.

NOTE: The page doesn’t seem to work properly on mobile. If you are having trouble, try entering the code using another browser or from a computer.

Most of the puzzles so far have resulted in emblem codes. There is also one emblem code that is unique to owners of the CE.

(CE Owners Only) The postcard

There is a code printed on the postcard which is single use and unique for each postcard. It can be redeemed on bungie.net/redeem. See The Postcard for how to find the code.

There are tubes/rods on pages 16 and 27 in the logbook. Page 16 contains the following: 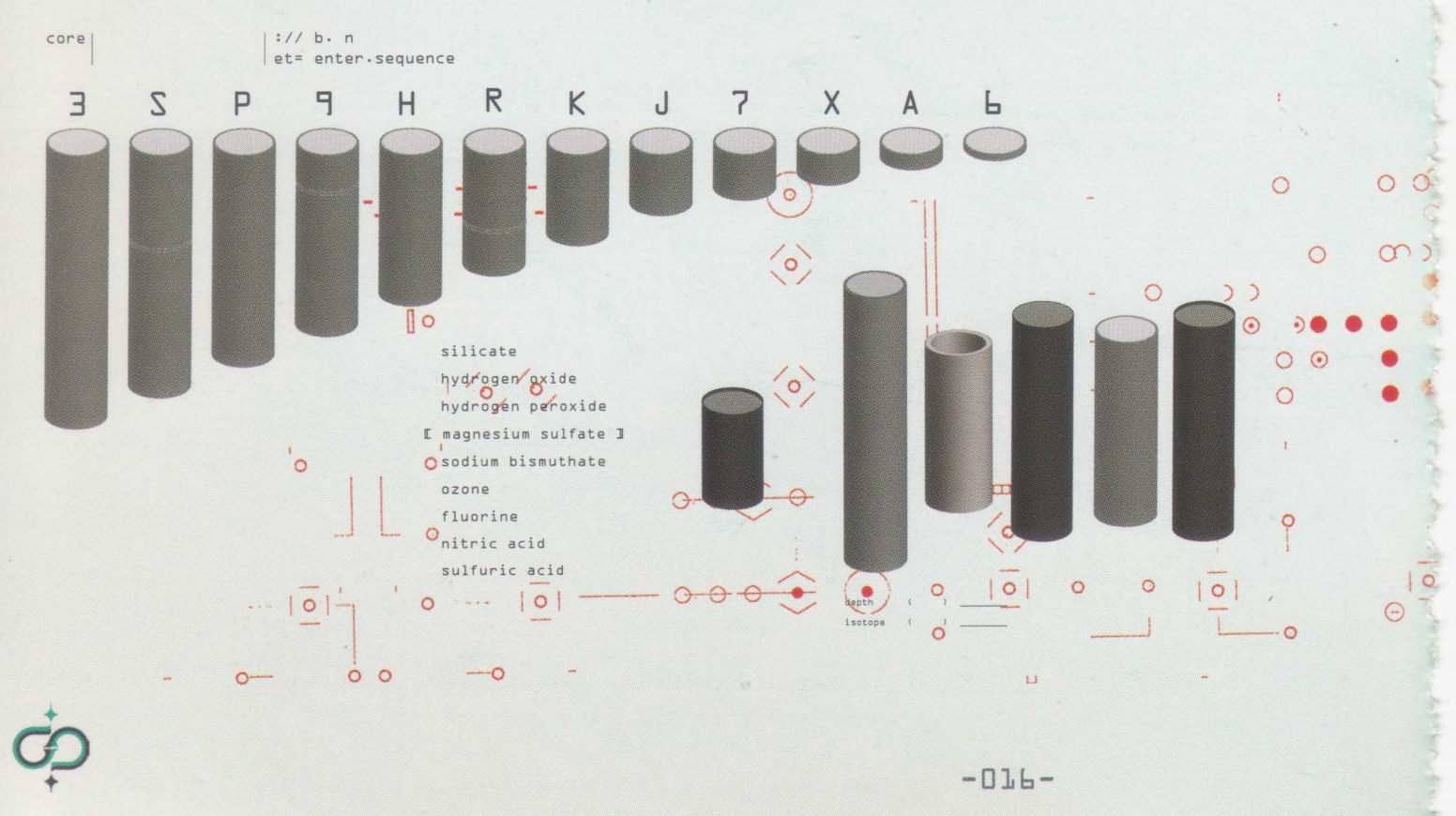 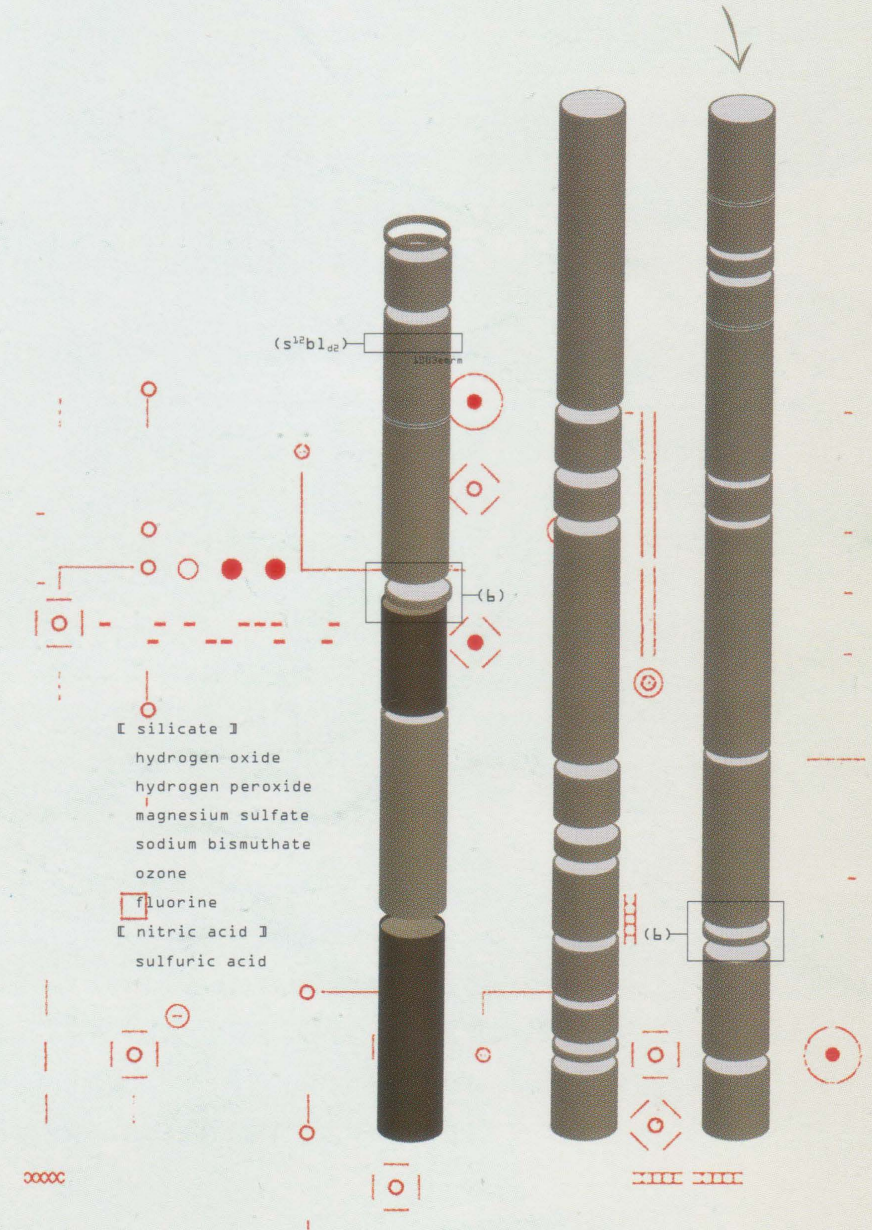 The rods on page 27 are each comprised of several smaller rods. If we use the legend from page 16 to translate to letters, we get the following three sequences:

There is an arrow pointing at the rightmost rod, and the code is indeed 9 characters long: RA9-XPH-6KJ. This is an emblem code, redeem it at bungie.net/redeem!

(Everyone) The Dot Letter Puzzle

On page 28 of the logbook, we find the following configuration:

On page 12, we find the same dot configuration, but without the letters:

However, the dot pattern on page 12 has a line going through it! If we start in the hollowed out dot and follow the line to the end, noting down letters as we pass through their corresponding node, we get the following sequence: JYNJAAY7D. This is 9 characters! Go ahead and redeem JYN-JAA-Y7D at bungie.net/redeem.

(Everyone) The Graph Puzzle

Page 39 of the logbook contains the following graph: 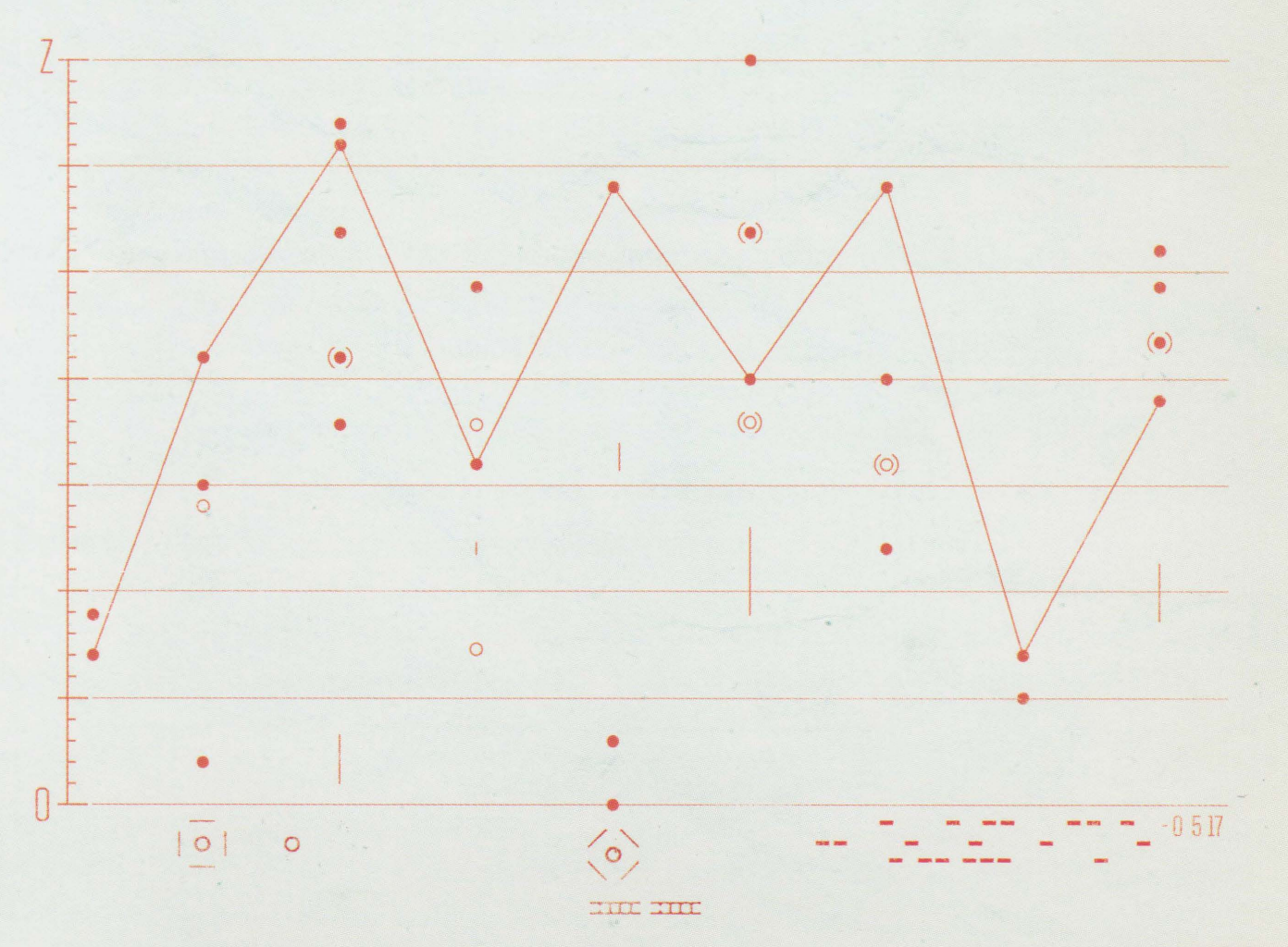 As you have probably gathered, there are probably more puzzles hidden here. There are patterns in the screenshots above I have not mentioned, and many more elsewhere in the logbook. What do they mean? We don’t know! Come to the #beyond-light-arg channel on the RaidSecrets Discord if you are interested in helping out with finding and solving them!

I am also a part of the Corridor Crunch discord, where we made a crowdsourcing engine for the Corridors of Time puzzle. We want to do the same for this ARG, and to gather puzzle enthusiasts on our Discord channel. If you are interested in helping with the crowdsourcing, development or puzzling, join us!

We’ve looked so diligently we even found mysteries where there were none. I list them here.

Someone noticed a weird maze-like structure in the upper left hand corner of the following image:

It was theorized that this might have something to do with Conway’s Game of Life. However, Cozmo confirmed on Reddit that this is just an image compression artefact.